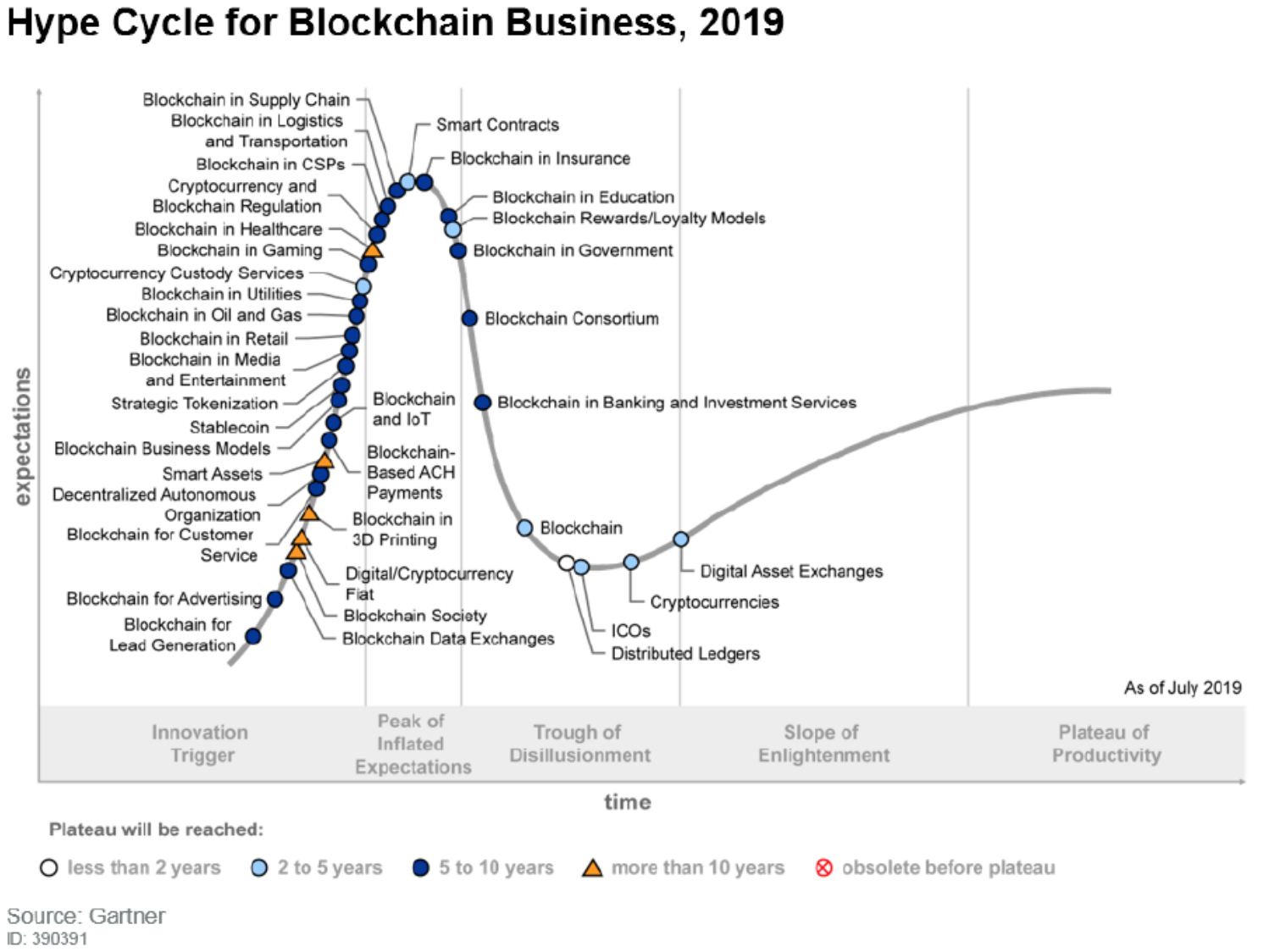 In part 1 of this publication Untitled INC members provided their ‘2 cents’ on the latest release of Gartner’s Hype Cycle for Blockchain Business. The hype cycle is always a good basis for discussion and its yearly publication a good occasion to reflect what was going in the last months in the blockchain space. Part 1 provided views from four of our experts. But that’s not all. Here are two more viewpoints. Since they go beyond a short statement we might rather call them our ‘2 Euros’ instead of ‘2 cents’ 🙂

The new edition of the hypecycle highlights the maturity of this foundational technology in particular for quite a few industry verticals as well as some specific use cases like cryptocurrencies, Blockchain and IoT. Other than that there are few concepts and hot topics mentioned such as Smart Assets, Smart Contracts, Blockchain, Distributed Ledger, Tokenization and Blockchain Business models. Most of the applications for the industry verticals are rated as being 5-10 years away to reach their plateau of productivity

I don’t really agree with this judgment. The Bitcoin Blockchain is now operating for roughly 10 years and it has already proven that it is working. Although Bitcoin did not become a means of payment at scale it is established as a store of value for long term investors and a hedge against black swan events in the traditional financial system.

DLT by contrast, where many projects have still not yet launched their mainnet, seems to be a bit further from reaching its plateau of productivity for me. There are many challenges in the implementation of these concepts including the implementation of advanced consensus mechanisms like proof of stake. Most projects are still in a phase where the protocol level software is developed and applications, but middleware tools to facilitate applications development and analytics are still in development.

What else: In terms of the rating of custody services I would say that there are about 10 regulated providers and thus these are closer to a plateau of productivity than Gartner’s 5 – 10  years rating.

Most relevant topics for me on this hypecycle: “Blockchain Business Models” as well as “Tokenization”:

In regards to business models we have so far only seen ICOs based on smart contracts on top of the Ethereum blockchain as being successful in terms of tangible impact. Billions have been raised through this crowdfunding mechanism and this money is at least partially deployed in developing protocol infrastructure, middleware and applications.

In regards to Tokenization, I expect that Security Token offerings (a term which is missing to my surprise) will have a massive impact in less than 5 years in the financial markets.

From my perspective that are terms like Blockchain / DLT Security, Blockchain Analytics and Blockchain (Project) Governance but also key cross vertical use cases like Identity Management.

Is this Blockchain hypecycle useful?

This hypecycle definitely inspires to reflect and to start a discussion among experts. It fosters the development of a meaningful terminology in the field.

What could be done in addition?

Potential evolution trajectories for the hypecycle for me are the following:

“Gartner’s hype cycle graph is more than just fuzzy concepts to the left, and concrete tech deployments to the right. Especially in the DLT ecosystem, achievements of one element can have a significant impact on the whole system. Hence, I like to lay out my observations on the interdependencies between these elements and the ecosystem in total. First, I cluster elements that share the same patterns in 3 groups.

For each group, I will answer the key questions: What characterizes each group? What are the success factors to evolve in the respective field? How do they affect other groups? Finally, I will take a look into the crystal ball and try to imagine how the future could look like.

For now, there exist only foggy placeholders for potentially industry-specific blockchain solutions. All we know is that the industry-specific position along the curve is so far relatively irrelevant and it depends on the industry’s experience and pressure to innovate – expressed by innovation power, power centricity, industry margins, degree of digitization. With regards to DLT, currently each industry goes along the learning curve individually.

Regardless of their specifics, the option space for all blockchain solutions in all industries is for me pretty clear: it ranges from efficiency improvements intra-company, value networks inter-companies, to completely new business models for everyone to participate in it – to be explored in that order.

Outlook: Soon, proven solutions will clear the fog in box 1: players in each industry will set up dedicated blockchain teams and integrate solutions from box 3 (first efficiency improvements and inter-companies partnerships). Later, box 1 will not be filled with industry-specific placeholders, but a race among different moral concepts will emerge to match up with technological advancements, which require a reassessment of our current social system: What is (of) value? How to distribute? How to own? How to control? How to live? Examples for concepts include: unconditional basic income and the social bonus system in China.

Players in mobility and financial services built blockchain consortia to rather share R&D risk for their individual projects (mostly efficiency improvements) than set up relevant platforms with partners. Despite efficiency projects with no business model disruption (e.g. loyalty programs: act as the central bank in your own universe) in development,  on concept level different platform philosophies are been discussed. The discussion centers around questions such as: Does the company own the user data in the platform? Is it shared with all participants? Does the platform make the decision or is the authority with the user-facing company?

Regulators will speed up the more they understand the technology and pave the way for faster implementation (e.g. smart contracts, GDPR/privacy)

Outlook: Corporates will have to change their understanding of innovation, e.g. become a participant in a platform, and ultimately their role in owning and controlling assets – from efficiency improvements to business disruption.

Group 3 – Let’s plant the seeds of our first low-hanging fruits!

In this group, we can just erase the two placeholders “blockchain” and “distributed ledgers”. It is important to highlight that already working applications are end-user oriented and have been built by startups not corporates. Fast developments were possible only outside of regulatory limitations, now regulators react and collaborate with solution providers (AML/KYC, custodianship), which makes the elements of this group more ready for adoption than indicated (e.g. cryptocurrencies, with bitcoin as a 10-year-old front runner)

Outlook: Successful solution providers will receive the mandates to build solutions in other industries and infrastructure providers (IBM, SAP, Amazon) might accelerate the implementation. In the long run, we might understand that DLT can free up value that needs to be managed at high costs in traditional organizational structure. Either asset-rich incumbents or completely new organizations will understand the paradigm shift and resolve themselves and all other players in a platform = providing a business model for open source technology. This is what I coin platform singularity.

That’s my humble view through the crystal ball. What is your biggest take-away? On what point we disagree the most? Happy to learn about your view – feel free to reach out, give it to us straight!”

Visit our blog if you are interested in further insights on blockchain, distributed ledger technology and the decentralized economy.