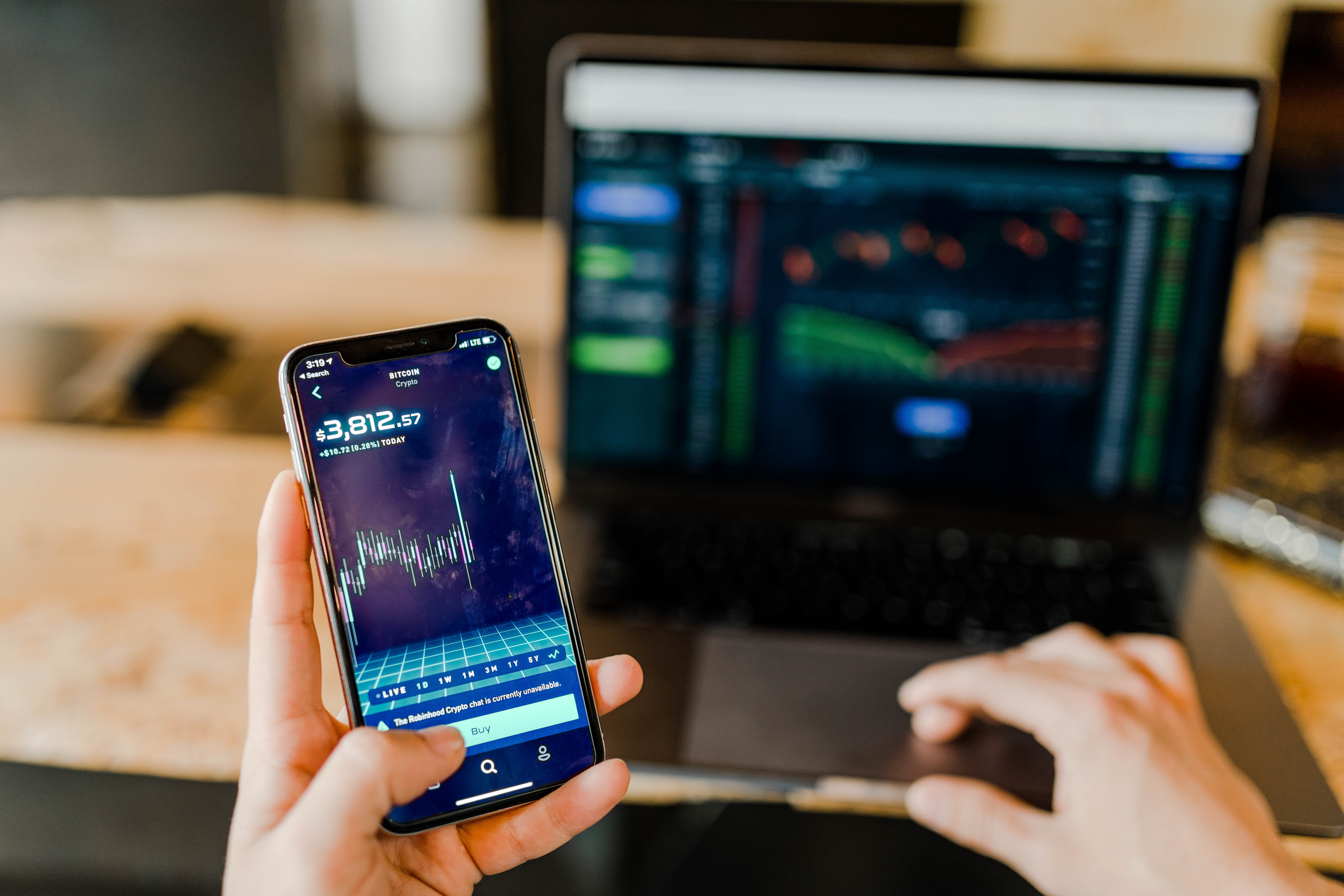 This is the web version of our newsletter Distributed Economy Update

The second Distributed Economy Update is here. In this week’s edition, you’ll find a closer look at the interplay between new banks and new digital asset classes, a critical examination of Facebook’s Libra, a potential UX gamechanger for Ethereum dapps, and a book recommendation for your summer reading.

We hope it satisfies your curiosity!

And to our German-speaking readers: we offer a German version as well.

A huge issue for Crypto markets has always been their lack of liquidity. The notion has continuously been that it will get better, once the mainstream or institutional investors arrive.

While both of these groups are slowly getting into the markets, we might not have to wait as long as we have assumed. With new financial services players like N26 raising $470m in this year alone, Revolut adding stock trading to its platform for more than 4.5m users and Robinhood being a household name amongst investors under 35, innovation cycles will speed up considerably. Börse Stuttgart already let you trade Bitcoin and Ethereum right next to Stocks on their Bison Application.

The consumer bank of the 21st century is a tech company. It is an online, digital service with overheads way lower than those of established players. I dare to say that these “new” banks will be far more open to listing tokenized securities than any legacy player.

Libra – Facebook´s digital currency – is a complex project which has critical implications, including economical, monetary and geopolitical. I have tried to analyze them in my article of which this represents a very short summary. You can read the full article here PART I and PART II .

Is Libra a cryptocurrency or a stablecoin?

It has some of the features of other cryptocurrencies such as being cryptographically secure, it runs on a permissioned blockchain and it can be global and fungible, at least in theory. It has none, however, of the features of the classic cryptocurrency paradigm originated by Bitcoin – i.e. being a fully decentralized, trustless, open, censorship resistant and strongly resilient system of payments.

It is not a stablecoin either. In a stablecoin – such as Tether (USDT) – the money supply does not change since 1 unit of fiat money is subtracted from the real economy and lies unused in the reserve, while 1 unit of digital coin circulates. This does not happen with Libra: here 1 unit of fiat money goes into the reserve fund and buys 1 unit of, say, treasury bond; at the same time, though, 1 unit of digital Libra is created and transferred to the user who will use it to buy goods and services in the real economy. The result is that the money supply is doubled. Therefore, as it is conceived, Libra is an inflationary digital currency definitely not a stablecoin and far from non-inflationary or outright deflationary store of values like gold or bitcoin. It will affect directly the monetary supply of the country in which it is spent: by introducing more money which chases the same goods this will increase price inflation and the purchasing power of the local currency will decrease. This can have important geopolitical implications which are dealt within Part II of the full article.

Libra can become the largest retail bank and investment broker in the world without need to open one single branch. And it may also become a strong competitor for central banks around the world. By affecting local money supply and by bringing inflation in the countries in which it is spent, Libra effectively acts like a central bank. If it gains traction it may well be a better alternative to any fiat currency.

Libra: how to make your money work for … Facebook & Co.

Libra is only about one thing: making money. And few things are better than making money with someone else’s money and no risks attached. It´s one of the oldest jobs and it´s called banking. Facebook´s new business strategy is to pivot to a more profitable, fee-based business model – which is called digital banking – and leverage their 4.9 billion users to promote their own fee-based digital payment system which, by turning your fiat money into a digital coin, can yield them tens of billions without any risk. According to my calculations (see full article) this can easily yield Facebook & Co. up to US$ 140 billion per year only with fees and interest yield on the reserve fund.

Libra will not solve the “unbanked” problem

Because Libra will effectively lower transaction costs in respect to traditional banking, it will achieve some higher level of financial inclusion, but it cannot solve the regulatory compliance problem which is the root of financial exclusion. Therefore “true financial inclusion” will remain the prerogative of Bitcoin and other fully decentralized privacy cryptocurrencies, but Libra can positively contribute to it by lowering banking costs.

The assumption is that Calibra wallet users may commit anything from US$ 176 billion to US$ 2,05 trillion to the Libra reserve fund depending on wallet adoption rates and average monthly expenses. Just consider that the current annual supply of US Treasuries is approx US$ 1 trillion. Libra could then satisfy anything from a low 17%, up to almost twice the total annual debt offer by the US government. This can become a very powerful geopolitical tool for the US government, an opportunity that they cannot lose. When large parts of the world are looking for alternatives to the US$ as the global trade currency, a corporate global digital currency could be stealthily used to foster US geopolitical interests in those very same countries which are trying to escape them, such as in China, Russia, EU, Iran, Venezuela, Syria, Turkey etc.

This is just a short summary of some of the main issues analyzed in the full article. Read it here: PART I and PART II.

A Better UX for Ethereum Dapps with Gas Stations

One of the major pain points for every decentralized application built on top of Ethereum is the user onboarding process. Users have to deal with any combination of the following pleasures: managing private keys, installing Metamask, generating a seed, acquiring Ether at a fiat gateway, and, critically, spending it on gas fees. (And, not to be overlooked: they need to understand what the heck the app wants from them in the first place.)

It is because of exactly this hassle that many Ethereum dapps struggle to gain any traction at all and, vice versa, that several app developers who are, in principle, interested in building on decentralized architecture refrain from doing so.

The newly launched Gas Station Network, an open-source project originating from the MetaCartel and OpenZeppelin cosmos, attempts to change this. Here’s how it works, as described in the announcement post:

“GSN is a network of servers — called relayers — that are waiting to execute transactions. Each relayer gets paid for every transaction put on the blockchain. Relayers are incentivized to behave correctly and not cheat.

Best of all, GSN doesn’t require any centralized server or entity to organize it. Your application gets a response with all the available relayers. These relayers are stored on Ethereum inside the RelayHub smart contract. Your app can choose the relayer that is going to execute the transaction based on its reputation.“

If you want to see the GSN in action, you can use this chat app demo. If it works as seamlessly in practice as it sounds, GSN might turn out to be an important innovation from many angles:

Ramon Recuero’s puts it perfectly in the same announcement post:

“If you are using blockchain, you need to figure out a way of providing unique value for your users. You need to hide all the blockchain technical complexities and the cost associated with it. Transaction costs and gas fees are now part of your customer acquisition cost (CAC). Deal with it. Your users won’t.“

Studying at the intersection of economics and philosophy you get to know several political and economic theories. You’re welcome to take me at my word on this: Radical Markets is my favorite theory of this kind that I encountered during my studies. The book was not published until 2018. This adds up to an incomparable relevance.

Vitalik Buterin, creator of Ethereum, summarized the general philosophy of the book as follows. (His review originally drew my attention to the book. It’s also a good first port of call to better understand it.)

“Markets are great, and price mechanisms are an awesome way of guiding the use of resources in society and bringing together many participants’ objectives and information into a coherent whole. However, markets are socially constructed because they depend on property rights that are socially constructed, and there are many different ways that markets and property rights can be constructed, some of which are unexplored and potentially far better than what we have today. Contra doctrinaire libertarians, freedom is a high-dimensional design space.“

Today Buterin is a board member of the RadicalxChange Foundation. Moreover, he has developed an academic paper on Quadratic Financing – an alternative approach to public goods funding – together with Zoë Hitzig and Radical Markets co-author Weyl.

Why is all this important for a newsletter about blockchain technologies? Given recent progress in computer and social sciences, we really seem to be on the verge of social change. For the worse or the better? The technological advances could on the one hand, drive hate speech on social media, closed financial markets and data trafficking, and on the other hand, be used to build a future of peace and prosperity. Either way, blockchain technologies constitute a toolkit that allows us to change how we organize society.

The theoretical concepts underlying the largest Western institutions – such as democracies and markets – find their intellectual origin at times long before computers, the internet and blockchains were invented. Radical Markets takes an interesting approach: it proposes innovative mechanism and policy designs to govern human cooperation in a digitized world.

In upcoming newsletters, I will discuss certain RxC concepts in detail and hint at their potential use cases in real life organizations.