The development of the framework presented in here was a collaborative effort between me and several of my Untitled INC fellows. Peter Trapp was heavily involved in all aspects of the creation, including lending his surprising design prowess to it. Prof. Dr. Andranik Tumasjan of the University of Mainz (and formerly Technical University Munich) provided very valuable feedback and ideas, as did Dr. Oliver Krause, Dr. Karl-Michael Henneking and Daniel Pichler.

Blockchain, ICOs and bitcoin’s wild ride have been some of the hottest tech topics in 2017. Yet, while people spent billions of dollars on cryptographic tokens, the understanding of the different token types out there is still limited. Even among regular investors and long-standing members of the blockchain community.

One reason for it — a quite common one in emerging domains — is the lack of clear, generally agreed upon terminology and definitions. For instance, I regularly come across people who refer to all tokens as “cryptocurrencies”. Which, as we are going to see in a minute, isn’t precise. Which is somewhat problematic because precision in language and terminology is the basis for an informed, nuanced dialogue and good analysis.

Whether you want to develop a token or evaluate one, it’s critical to understand the nuances of the subject. Moreover, the blockchain community is growing and maturing. As a result, it is increasingly getting in touch with “the real world” (aka people who are new to the subject). Investors, regulators, politicians and decision-makers in businesses are all taking the space increasingly serious. Many are in the process of formulating their positions and strategies for dealing with the subject. Clarity and accessibility of relevant knowledge are key to allowing those actors to make good, informed decisions.

This is why we, the Untitled INC team, set out to develop a framework that a) reflects the various existing token types, b) allows to classify and analyze tokens in various relevant dimensions, and c) fosters a better, nuanced understanding of crypto tokens. Today, we are presenting the first iteration of the Token Classification Framework, the result of our effort. In this post, I’m going to walk you through the framework and explain the work and thinking that went into it.

Before we get into the framework, some technical and procedural remarks.

To develop the framework, we reviewed a lot of work on tokens that had already been put out there. Many smart people published very helpful thoughts and ideas which influenced our thinking and chosen terminology. You’ll find a list of references at the end of this article.

The version of the framework in this article is version 1.0 of the Token Classification Framework (TCF). The crypto space is moving at a rapid pace, so we expect to see new developments and innovative approaches to tokens quite frequently. Thus, we regard the framework as a living document. The version in this article shall serve as a point-of-reference going forward, so we won’t update the TCF in here. Instead, we’ll host and maintain the most current version on our website. 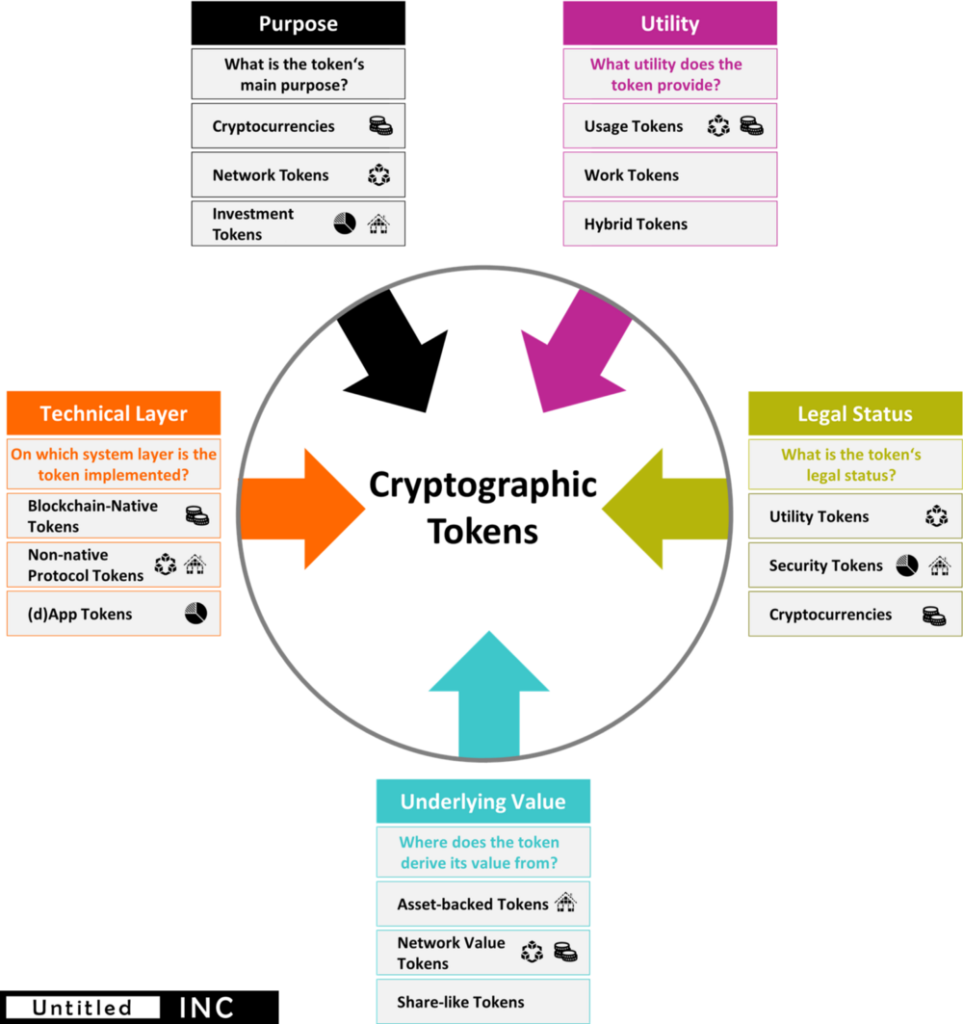 There are multiple angles from which you can look at tokens. Back when we began working on the framework, we quickly realized that it would have to cover multiple perspectives in order for it to be useful. After reviewing the current literature and analyzing dozens of whitepapers, we distilled five major dimensions which we wanted to reflect in the framework: a token’s purpose, utility, legal status, it’s underlying value and the technical layer it’s implemented on.

Purpose. What is the token’s main purpose? What is it designed to do? This dimension illustrates why the people who call any token a cryptocurrency err. Tokens can certainly be intended as a cryptocurrency. But often they are meant to enable a specific network and catalyze its growth (network tokens) or merely present a way to invest in an entity or asset (investment token).

Utility. The term “utility token” has become commonplace¹ but there are various types. When looking at different tokens, you’ll find many approaches to creating utility for token owners. But on an abstract level, there are two major ways to provide utility: by giving access to network or service features (usage tokens) or by allowing token holders to actively contribute work to the system (work tokens). Some tokens do both (hybrid tokens) and some tokens don’t provide any utility at all².

Legal Status. The legal perspective is extremely relevant as of now, so it is reflected in the framework. The category’s content, however, is expected to change quite a bit in the upcoming months as it is a volatile environment and more regulation is expected to emerge. Moreover, every jurisdiction can differ. The general outline of the current state in multiple countries is that tokens which aren’t clearly a utility token — i.e. a means to access features of a network/service — or which aren’t a pure cryptocurrency can easily be classified as a security token by regulators. In some jurisdictions, such as Germany, there is some definition by regulators as to what constitutes a cryptocurrency. Several cases we found hover between two types, due to fact that current legal frameworks have been created before tokens existed and most haven’t been updated so far. (This isn’t legal advice.)

Underlying Value. Most tokens are created to have a monetary value. But the sources of their value differ considerably. Some basically work as IOUs to a real-world asset which they are tied to (asset-backed tokens). Others showcase stock-like properties as they are linked to the commercial success of the issuing entity. Those share-like tokens would be regarded as securities in most jurisdictions (actual enforcement by the regulator is a different subject). Finally, there are tokens which are tied to the value of a network, not a central entity (network value tokens). The latter might be the hardest to wrap one’s head around and the most interesting value source at the same time.

Technical Layer. Tokens can be implemented on different technical layers of blockchain-based systems: on the blockchain level as the chain’s native token (blockchain-native tokens), as part of a cryptoeconomic protocol that sits on top of the blockchain (non-native protocol tokens), or on the application level ((d)App tokens).

It’s important to note that the dimensions are complementary. Most tokens can be assessed in all dimensions and, as we’ll see when looking at the archetypes, there are strong correlations between some types in different categories.

In any dimension, we identified various token types, summarized their main characteristics and included relevant examples. You can find the result in the graphic below. 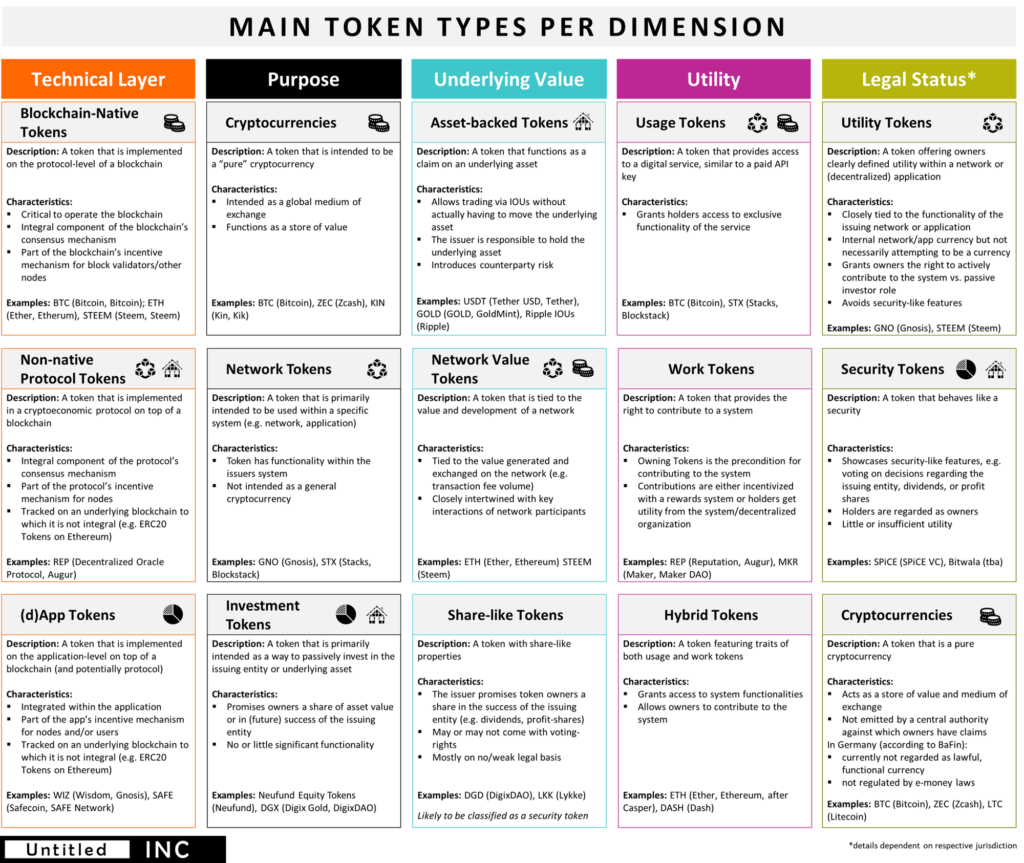 Putting the TCF to the Test

A granular framework like this allows us to understand a given token with a higher degree of precision. In order to put the framework to practice, we looked at several tokens and classified them. You’ll find some examples from a recent workshop we held below:

As the first chart shows, you could call Augur’s REP a Non-native-protocol-Network-Network-value-Work token that would likely classify as a utility token.

Let’s stop here. If you are interested in playing around with the framework, you might want to start with Ethereum and classify it yourself.

After using the framework to classify a fair number of tokens, some patterns emerged (unsurprisingly). As I said before, there are some rather obvious correlations between different token types. For instance, many network tokens (by purpose) will also be network value tokens, i.e. their value is tied to the value of the network they are used within. Similarly, an investment token will basically never be a network value token but either asset-backed or share-like. We looked at those patterns and derived some archetypes. 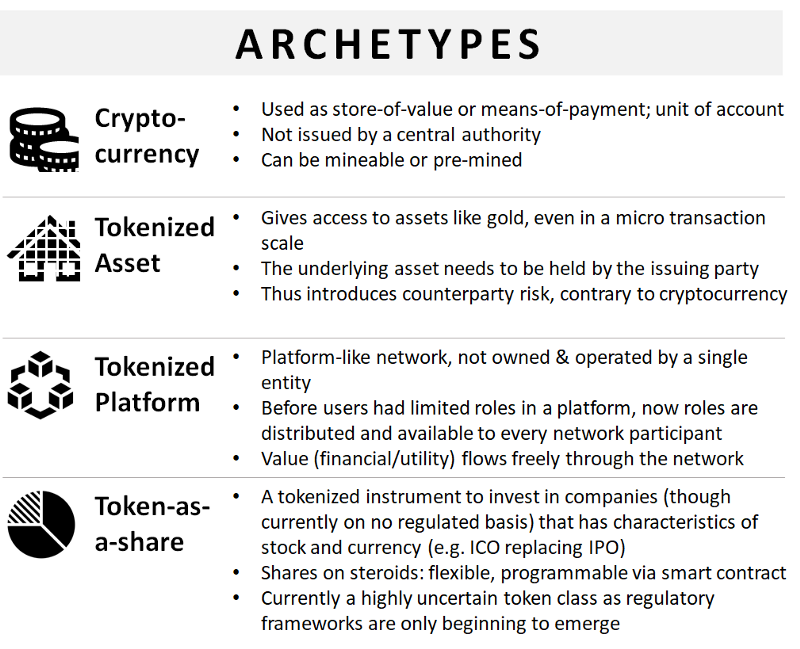 We think the TCF is useful to classify and create more clarity around the various token types you can find today. Still, it is important to note that it isn’t enough to merely analyze a token.

Crypto tokens don’t exist in isolation but are only one component of a distributed ledger system. While tokens are an integral component of the system — as they are critical to establishing a cryptoeconomic dynamic —the token layer is only one of three system layers. The others are the governance and technology layer, which are connected by the token. I won’t go into detail on the model below, as it merits its own post in the future. For now, it’s enough if you keep in mind that any assessment of a DLT project shouldn’t exclusively focus on the token but look at the entire system. 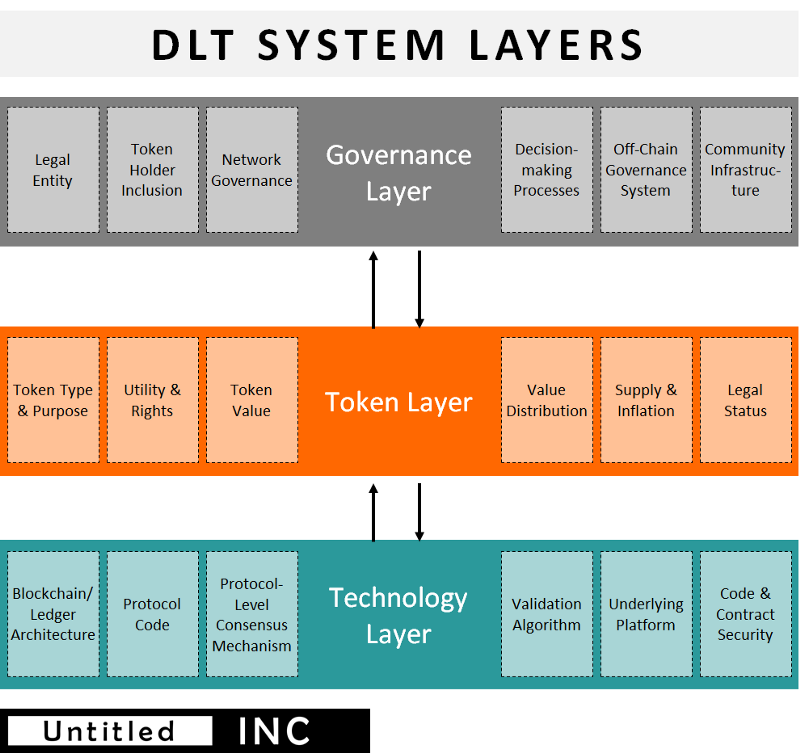 Now that you are familiar with the different components of the TCF, you can find the complete framework below in high resolution. As it is published under Creative Commons, feel free to share and iterate on it. Just don’t forget to link back to us. And if you have comments or suggestions for further improvements to the framework, please let us know.

As the blockchain space matures, clarity and a precise terminology become increasingly important. With the TCF, we hope to have created a valuable resource that contributes to a better, more nuanced understanding of tokens. As it is now part of the commons, everybody is invited to further improve it.

What’s not in there

There are two potential dimensions which we thought about but eventually didn’t include in the framework: the Issuance Approach and Supply Structure. In the case of issuance (ICO, airdrop etc.) it’s only a one-off event that we didn’t regard as a fundamental characteristic of the token. It doesn’t influence how the token behaves long-term. Thus, we eventually decided against including it.

In the case of supply (fixed, inflated with cap, inflated without cap), it’s dicier. On the one hand, it is very relevant when it comes to investment decisions. On the other hand, it’s not a characteristic of the token itself but rather a property of the overall system (which is why it’s part if the token layer in the DLT system layers model but not a token dimension). Depending on your feedback, we might rethink our decision, though.

¹ Mostly because everybody who performs an ICO emphasizes that the issued token is a utility token in order to avoid being regarded as a security.

² While tokens which don’t provide any utility are often frowned upon, that thinking shouldn’t be generalized. While its often a characteristic of scams, an asset-backed token doesn’t necessarily need any further utility to be legitimate.

Thomas is an experienced consultant, analyst, and writer at the intersection of tech, business, and the digital economy. He has been researching and regularly covering the blockchain space for several years now as he has long been interested in decentralized systems and new types of organizations.

43 thoughts on “The Token Classification Framework: A multi-dimensional tool for understanding and classifying crypto tokens.”