If it comes to Blockchain and Distributed Ledger Technology, you might first think of Bitcoin, crypto-currencies and the banking industry, but most probably not about telecommunications. So, no match on tinder?

By no means. We illustrate this first by having a closer look on devices for telecommunications, i.e. blockchain enabled or ‘crypto’ smartphones. In further publications we plan to tackle telecommunications services, opportunities for process optimization through blockchain technology and privacy protection.

So let’s start with devices. What’s going on in this space re blockchain?

Well, devices and blockchain just shyly started to tinder. It’s a fairly virgin market, in the very early phases of development. One of the pioneers in this field is Sirin Labs. They launched their Finney smartphone end of last year, shortly after followed by HTC with the Exodus as well as this year by Samsung with the blockchain wallet enabled Galaxy S10. 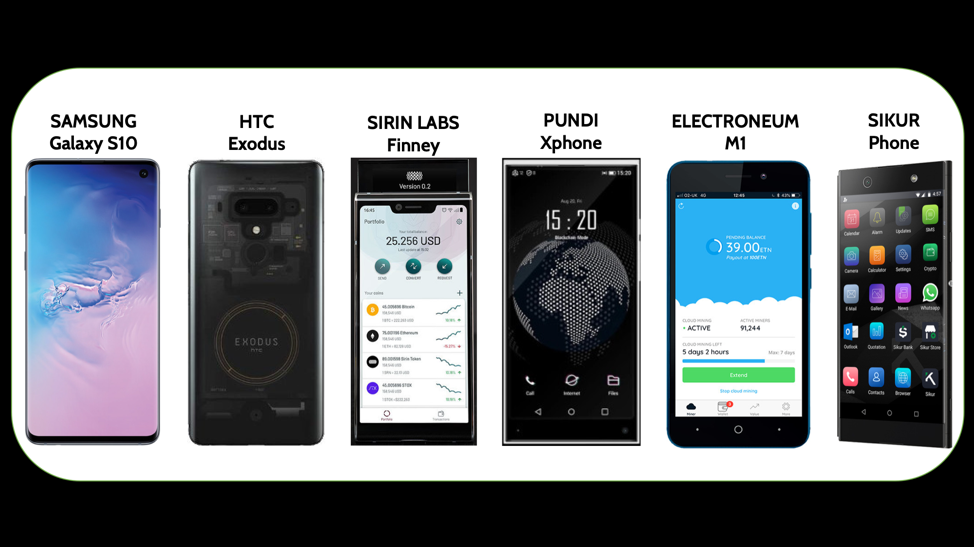 What edge do these blockchain or crypto phones have over other smartphones? First of all, it’s additional security through their built-in hardware wallets. The so called cold-storage is safer than holding cryptocurrency keys online on cloud servers or on personal computers. Compared to other hardware wallets based on stand-alone devices there are obviously cost and portability benefits since users don’t have to buy and carry a second hardware. Although storing private crypto-currencies keys is the most straight forward application, any private key, token and digital asset can be safely stored on the blockchain phones.

Furthermore, the wallets enable users to securely access decentralized applications or DApps. With DApps you can for example send, transfer or pay with cryptocurrencies, store CryptoKitties or other digital collectibles, reward users for providing data on social media, bring trust to online gambling and tokenize items or vote in online-games. This is just to name a few, see more here. As of now, DApps haven’t reached the mass market yet, but this is expected to change in case the Internet becomes more decentralized and distributed in nature, as the Web 3.0 movement propagates.

Next to Finney, Exodus and Galaxy S10, there is currently the $80 Electroneum M1 on the market and the PundiX phone is expected to be available during this year. The latter phones both serve as nodes in the blockchains of their makers and thus contribute to the overall security of the network. In addition, the cybersecurity firm Sikur also launched a phone with a crypto-wallet beginning of the year, which is essentially a Sony device with integrated Sikur software. The Sikur phone is priced at around $799 and thus comparable to the S10 ($750), cheaper than the Finney ($999) and more expensive than the Exodus ($699) and the PundiX ($599).

The implementation of blockchain technology in telecoms – be it devices, services or applications – is currently strongly driven by Asian companies. In Asia, ecosystems have emerged consisting of device manufacturers, network equipment suppliers, telecommunication service providers and financial institutions, which – supported by governments with ambitious technology agendas – push for adaption and diffusion of blockchain technology. South Korea is a good example: here Samsung joined forces with the local telecom service providers SK Telecom, Korea Telecom and LGPlus as well as with banks to launch a blockchain based mobile identity system next year. The system enables individuals and organizations to fully control sensitive personal data in online transactions. Passport data, resident registration, bank account or credit card numbers stored in the self-sovereign identity system can be accessed by 3rd parties only at will of the user and for authentication and verification without actually submitting the data. This constitutes a fundamental paradigm shift compared to today’s common practice on the Internet, where online giants amass and store personal data of millions of people centrally and are prone to hacks and data breaches. The South Korean case also shows that industry overarching partnerships as well as the co-operation between enterprises within the same industry are mission critical to fully unfold blockchain’s potential.

But despite all excitement about blockchain, it is worth to ask the question, who is willing to pay up to $999 for a crypto-phone. The answer is crystal clear: At the moment the mass market is not ready for these phones, definitely not in Europe. The devices are only appealing to a very niche segment in the crypto- and blockchain community in this part of the world. A slightly different perspective can be taken with regards to Asian markets, where people are more crypto-enthusiastic and technology-affine. Samsung’s announcement to make its digital wallet available to lower-cost models and the recent release of new DApps, both can enable a deeper market penetration in the future. The recent agreement with PundiX to integrate their XWallet in Samsung’s app is also supportive to this development. Samsung sold more than 71m devices in Q1 only, is the world market leader with a 23% share and as such is a player that can set industry trends. At the same time, Facebook’s Libra makes the market moving, and will eventually increase demand for storage solutions and wallets on smartphones.

For the future, we expect growing traction when it comes to the application of blockchain technology in telecommunications in general, not only in the device market. In the last two years we have seen communication service providers, network equipment suppliers and regulatory bodies becoming more active in the blockchain space. On top there are the New Kids on the Block. All, new and old kids working on business model and service innovation as well as efficiency improvements through blockchain, distributed ledger technology and smart contracts.

More on this to come. Stay tuned!